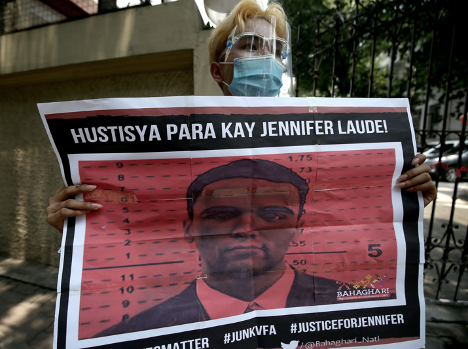 The President has granted an absolute pardon to United States Marine Joseph Scott Pemberton, absolving him of all legal punishments and clearing the way for the soldier’s early release.

Pemberton was convicted of homicide and had been sentenced to 10 years in prison last December 2015 over the killing of Filipino transgender woman Jennifer Laude. However, with Duterte’s absolute pardon, he is set to be freed four years earlier after he was recently granted full credits of Good Conduct Time Allowance (GCTA) under a Philippine law.

Clearing Pemberton of his sentence is a direct attack to the LGBT community as it denies justice to Jennifer Laude’s death. In 2015, Laude died of asphyxia by drowning and strangulation after Pemberton discovered that she had male genitals.

We, at the Filipino LGBT Europe, condemn this decision and appeal to the President to revoke this absolute pardon. This “free pass” sets a dangerous precedent to cases of murder and abuse against members of the LGBT community, as it allows impunity and injustice to persist. To allow Pemberton to walk free is a disservice to all Filipinos defending their rights to legal justice against gender-related abuses and hate crimes.

We stand by our Filipino trans-siblings and the entire LGBT community during these difficult times.