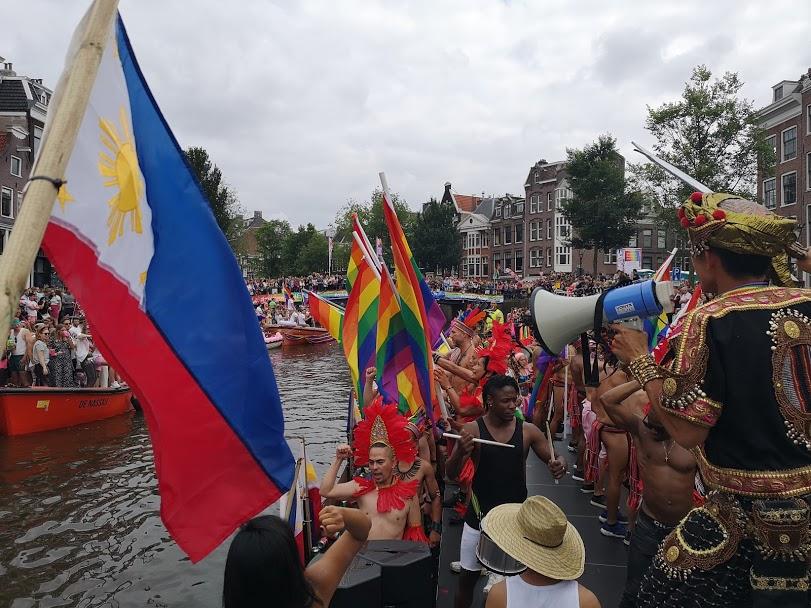 AMSTERDAM — Amid a colorful and vibrant sea of spectators celebrating the 2019 Amsterdam Pride, familiar Filipino chants echoed from the balangay-inspired boat sailing through the narrow canals of the old city.

I can still hear the sound of the megaphone in my head: “Mabuhay ang LGBT communities sa buong mundo! Mabuhay ang Pilipinas!”

I was lucky to be part of this historic event as a volunteer. It’s hard to put a word to the entire experience, but if I have to describe it, the word “Pride” pretty much sums it up.

It is an honor to participate in such a significant part of history, not only because it was the first Filipino boat to participate in the Amsterdam Gay Pride, it also signifies an increasing diversity in LGBT communities in Europe and around the world.

For the first time, LGBT Filipinos were officially represented in a Pride event in Europe, bringing important community issues forward: HIV awareness, marriage equality, and the fight against LGBT discrimination.

“We want to send a message of solidarity to Filipinos living in Europe and in the Philippines that we support the passage of the anti-discrimination bill in the Philippines. It is high time that the Congress approves the Sexual Orientation and Gender Identity and Expression (SOGIE) bill,” said Filipino LGBT Europe chairman Chris Sta. Brigida.

The Filipino vessel won third place in Overall Execution and Boat Design among 80 boats that joined the parade. This year’s theme was “Remember the Past, Create the Future” in commemoration of the Stonewall riots, which broke out in New York 50 years ago.

The Balangay symbolizes the historic roots of the many Filipinos living in Europe. It also represents the unity and solidarity of Filipino LGBTs in Europe as they push for equality and acceptance in the society.

Showcasing the rich culture of the Philippines, the costumes were inspired by various Filipino tribes and communities. Some costumes also borrowed from certain themes such as Filipiniana and the Ati-atihan festival.

“I wore a chieftain’s outfit to symbolize a leader calling for action. I want to remind the Filipinos living in Europe of our shared heritage through featuring our country’s national costumes,” Sta. Brigida said.

“The energy on the boat is great and I am really happy to be able to wear this wonderful costume,” said Soraya Layeb, a Dutch-Algerian volunteer.

Also aboard the Balangay is Mr. Gay World 2019 Janjep Carlos, who won the title in South Africa in May. He flew all the way from the Philippines to show his support for the Filipino LGBT community here in Europe.

“It’s a big honor for me to be able to represent the community in this event. This is an important opportunity to commemorate the efforts of the LGBT all over the world,” Carlos said.

More than the boat’s design, the Filipinos’ performance told a lot more. The routine started with a call to action on HIV awareness, followed by a campaign supporting the acceptance of one’s sexual identity and marriage equality.

The performance ended with the song “Brand New Day,” showing the LGBT community’s positive outlook for legislative changes in the Philippines and in the growing support for LGBT community around the world.

It was a simple routine, but it resonated to a lot of Filipino LGBTs—even those who were just watching and cheering from the sides of the crowded streets.

Frances Lachica, who traveled all the way from Vienna to see the parade, said, “Knowing how these volunteers worked hard for months and seeing the results in person, I felt extremely proud to witness this event. It was emotionally overwhelming.” — BM, GMA News

This article was first published at GMA NEWS NETWORK