thi AMSTERDAM, The Netherlands — In celebration of World Aids Day, the team of Jitty’s Hair & Make up salon in Amsterdam, The Netherlands is holding it’s annual fundraising event on 1st December 2019.

In line with this year’s World AIDS Day theme “Communities makes a diffrence”, Jitty and Team is doing an event entitled Haircut & Hair Colour for World Aids Day as they dedicate proceeds of their earnings of the day for charity organistaions AIDS FONDS and Philippine based charity organisation THE RED WHISTLE.

Philippine fastest growing of HIV in the world

The Philippines has been ranked as the country with the fastest growing number of Human Immunodeficiency Virus (HIV) cases in the world.

“We are the country with the fastest growing HIV epidemic in the world, not only in the Asia and the Pacific. In 2018 report, we’re now number 1 in the whole world,” Dr. Louie Ocampo, UNAIDS Philippines country director, said in a talk held at the Manila Doctors Hospital in Manila.

The UN organization said it recorded about 13,384 new HIV infections by the end of 2018. The number, according to UNAIDS, is 203 percent higher than infections recorded in 2010, with only about 4,419.

“[We are the] fastest growing in terms of growth rate comparing 2010 and 2018. But in terms of absolute number, we are still very low, [when compared to] African countries,” he added.

The UNAIDS estimated that there are now about 77,000 people living with HIV (PLHIV) in the Philippines. However, only about 62,029 of them have been diagnosed and reported.

Book your appointment now
In celebration of World AIDS Day, Jitty’s Hair and Make-up Salon team brings the attention of their costumers to the continous rising of HIV infections in the Philippines while having their haircut or haircolour done.  Drinks, canapes and entertainment awaits costumers who will be participating the fundraising event with famous DJ’s expected to set the mood.

AIDSFOND
Aidsfonds works towards the end of AIDS in a world where all people affected by HIV/AIDS have access to prevention, treatment, care and support. We can only stop the epidemic if we focus on the people and regions most affected.

For many years, Aidsfonds has played a pioneering role in focusing the AIDS response on those population groups who are affected the most by the epidemic due to stigma and discrimination.

More information about Aidsfonds via this link: https://aidsfonds.org/

As HIV advocates, The Red Whistle aim to empower and inspire people to come together and help each other in the battle against HIV and AIDS.  Using pop culture as a way to change mindsets, we hope to start discussions among the youth so that they will sound the alarm and spread the word that HIV is here — and that it must be stopped.

To read more about The Red Whistle, visit this link: https://theredwhistle.com/ 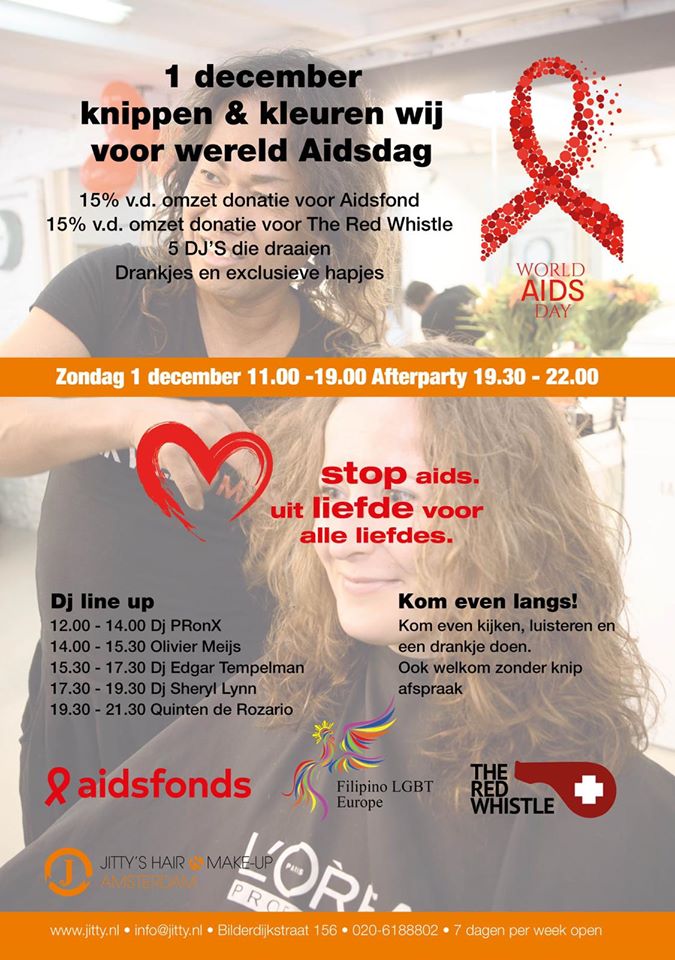