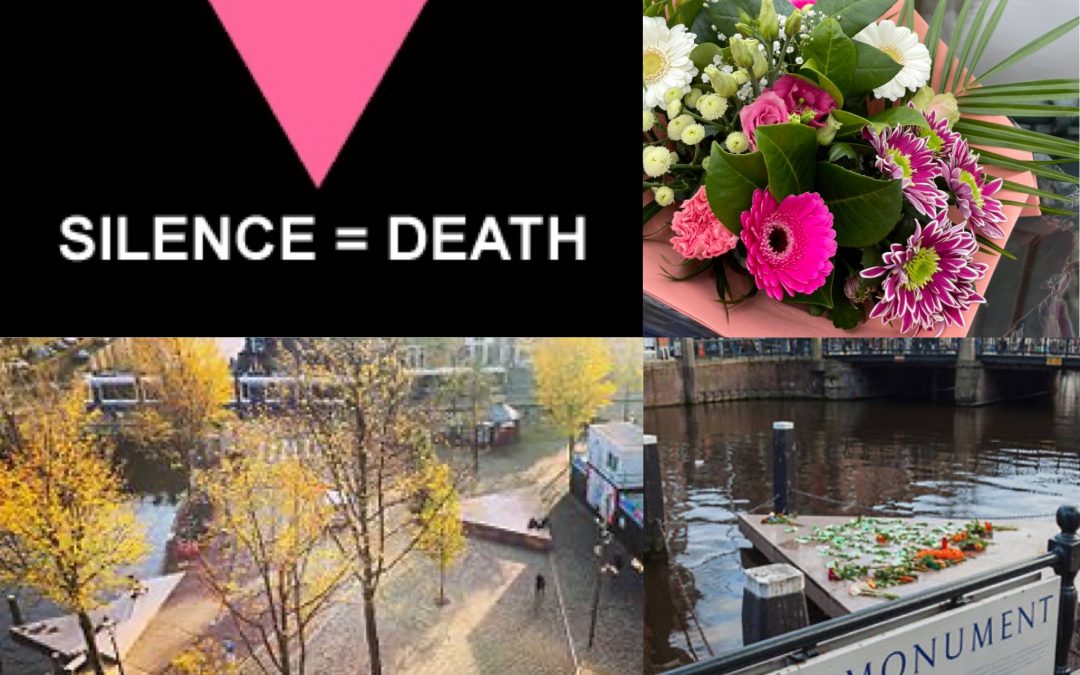 AMSTERDAM – Today we laid some flowers at the Homomonument in Amsterdam in commemoration of 17 million people who were exterminated during the holocaust.

Together with Jewish people, LGBT persons were also considered undesirable during that time and were incarcerated for their sexuality or gender identity. They were marked with a PINK TRIANGLE.

Under the rule of Nazi Germany from 1933 to 1945, gay men and (to a lesser extent) lesbians were persecuted with thousands of gay men imprisoned in Nazi concentration camps.

Beginning in 1933, gay organizations were banned, scholarly books about homosexuality, and human sexuality in general (such as those from the Institut für Sexualwissenschaft, run by Jewish gay rights campaigner Magnus Hirschfeld), were burned. The Gestapo compiled lists of homosexuals, and gay clubs were shut down. Some gay men emigrated while others withdrew from homosexual practices or engaged in heterosexual relationships to cover their identities.

Between 1933 and 1945, an estimated 100,000 men were arrested as homosexuals, of whom some 50,000 were officially sentenced. Most of these men served time in regular prisons, and an estimated 5,000 to 15,000 of those sentenced were incarcerated in Nazi concentration camps. Leading scholar Rüdiger Lautmann argues that the death rate of homosexuals in concentration camps may have been as high as 60%. Homosexuals in the camps suffered an unusual degree of cruelty by their captors, including being used as target practice on shooting ranges.[1][additional citation(s) needed] Homosexuals were additionally used as the subjects for Nazi medical experiments as scientists tried to find a “cure” for homosexuality.[2]

In 2002, the German government apologized to the gay community for the persecution of homosexuals by the Nazi government.[3] In 2005, the European Parliament adopted a resolution on the Holocaust which included the persecution of homosexuals.[4] Memorials to the gay victims of Nazism have been constructed around the world. Several movements like the Silence=death project have reclaimed the pink triangle symbol in support of gay rights, AIDS awareness, and related issues.

Persecution of LGBT persons will keep on happening if we remain silent. SILENCE means DEATH.