GMA News: 8 things to know about the Philippine-Netherlands relations 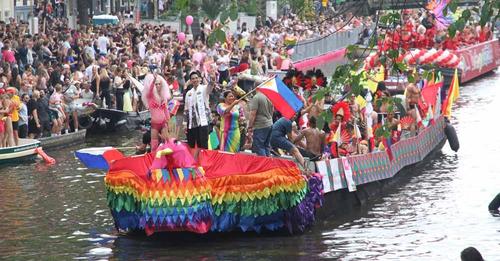 8 things to know about the Philippine-Netherlands relations

Filipino LGBT Europe is mentioned on number 3 and 6 on this write up!

Number 3: 2019 AMSTERDAM PRIDE
In 2019, LGBT Filipinos were officially represented in a Pride event in Europe for the first time. Showcasing the rich culture of the Philippines, the costumes were inspired by various Filipino tribes and communities.
But that’s not all: Of the 80 boasts that joined the parade, the Filipino vessel won third place in Overall Execution and Boat Design.
Number 6: BAYANIHAN / Independence Day Celebration
“We do not have a grand celebration for the Independence Day this year due to the restrictions still in place in the Netherlands, but through community relief efforts, we hope to give hope and happiness to Filipinos who were affected by the crisis,” Chris Sta. Brigida, chairman of Filipino LGBT Europe said.
Happy PRIDE po sa ating lahat!

Read the whole article via this link: https://www.gmanetwork.com/news/lifestyle/hobbiesandactivities/791351/8-things-to-know-about-the-philippine-netherlands-relations/story/?fbclid=IwAR20CqmrU3erC3ofYmD8LPDHGsehGhSK-yf-336BT_X3rZHQZPEioWHq3vQ