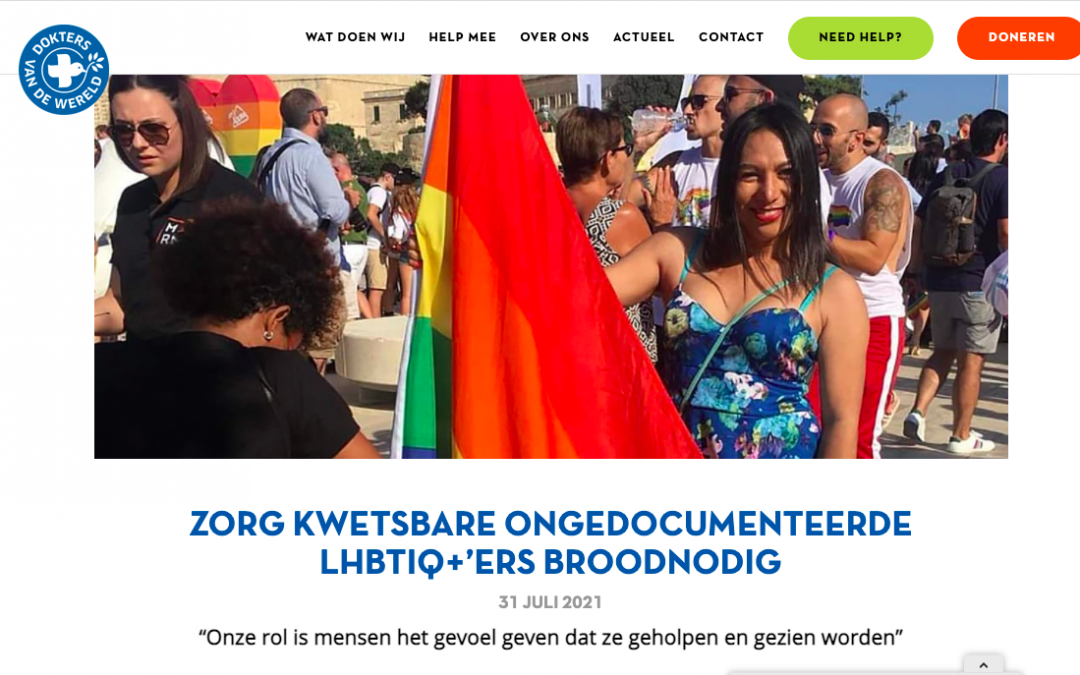 Pride Amsterdam is celebrating its 25th anniversary this year. In that time it has grown into a world famous event that attracts hundreds of thousands of visitors. You would think that the emancipation of lesbians, gays, bisexuals, transgenders and intersex (lhbtiq+) would be well advanced by now. That is disappointing, in seventy countries homosexuality is still punishable and in eleven countries you can even get the death penalty for your sexuality. In the Netherlands, too, LGBTQ+ people regularly feel unaccepted and unsafe these days. The most recent example of this is the assault of 14-year-old Frederique from Amstelveen. Her attackers wanted to know if she was a boy or a girl. When she wouldn’t say that because she thinks it doesn’t matter what you are, she got beat up.

The Doctors of the World logo has the colors of the rainbow lhbtiq+ flag during Pride. In our work we regularly encounter LGBTQ+ people. A large part of them had to flee for his, her or their orientation. Others emigrated to the Netherlands to work, did not receive a residence permit, but did stay. Like the Filipino Bianca. She is a transgender woman and has been living in the Netherlands for two years. In the Philippines, it is normal for transgender people to arrange their own transformation into male or female. Bianca: “At a certain point I started taking female hormones. That was nine years ago and I still do today.” She shows pictures of her transformation on her smartphone. Bianca was, and still is, not treated by a doctor. Something that is unusual in the Netherlands.

Police cell
Bianca continues: “During my transformation I moved to Dubai. There I worked as a make-up artist. I was in the middle of my transition when I got a nice assignment. On my way to the photo shoot I was stopped at the station by two policemen. I had already seen them looking at me strangely. Was I a boy or a woman? I wore no make-up and concealed my growing bust as much as possible, but apparently I stood out. They asked me for my ID. It said my gender is male and an old photo of me still looking like a boy. The officers looked at me from head to toe. “You don’t look like that photo at all,” they said. I felt more and more uncomfortable. Especially when they asked me to open my bag. It was completely covered in make-up!” Bianca was arrested and put in a cell. “It was terrible. I was so scared.” Fortunately, she was released after three days. She left Dubai and went back to the Philippines. Via Malta, where she worked for a few years, she eventually ended up in the Netherlands. When her European visa expired, Bianca stayed. She fell in love and now lives with a Dutch boy.

Self-medication
In the Netherlands, however, you cannot buy female hormones without a doctor’s prescription. A big problem for Bianca: “I hadn’t taken hormones for a year and I was terribly worried. If I don’t take it, I’ll turn back into a man.” Through the Filipino LGBT Europe interest groupin Amsterdam Bianca ended up at the doctor’s consultation hour of the Zorgbus. Bianca: “Doctor Erik helped me so well. Thanks to him I got hormones again.” For the record; doctor Erik is one of our medical volunteers. He is a general practitioner and does consultation hours in the Zorgbus. “This doctor is a household name in the LGBTQ+ community. Everyone knows him,” says Martha Teijema, member of the Healthcare Law team. “In principle, the doctors of the Zorgbus do not write prescriptions for medication themselves. We send people like Bianca to the center for sexual health of the GGD. That helps them further.”

Stigma
The doctors of Dokters van de Wereld see many undocumented lhbtiq+ people at the consultation hours of the Zorgbus. “That’s because sexual orientation is a common reason to flee your country,” explains Martha. “In collaboration with Filipino LGBT Europe, we offer a special consultation hour for this group in the Zorgbus. Many transgender people come to this with questions about their medication. They have a fear of stigma. The fact that there is a consultation hour for them makes them feel safe enough to talk about their problems. Also about HIV and HIV testing, for example. There is still quite a taboo on that.” Many undocumented LGBTQ people also attend the psychosocial consultation hours. Martha: “We do not focus specifically on this group here, but our psychologists see many refugees, men and women, with very intense stories. People have fled their home country because they are gay or transgender. For example, we have quite a lot of women from Uganda. In that country you are literally locked up if you have sex with a woman as a woman.”

COcktailparties
Doctors of the World has recently started working together with the GGD in Groningen. The COC organizes cocktail parties in that city. Visitors can also be tested for HIV during these parties. Cocktail is a buddy project of the COC. It brings lesbian, gay, bisexual and transgender asylum seekers into contact with Dutch LGBTIQ+ people. Martha: “We train the doctors who administer the tests at these parties. These are all fairly young doctors and in order to prepare them a bit well, we have set up a training course that informs them about culturally sensitive matters, but also makes it clear what your own assumptions are, how you approach people, things like that.”

Knowledge and trust
The added value of Dokters van de Wereld is our large network and the function of trust we have within the various communities. Martha: “The role we have as Doctors of the World is that of knowledge and trust. Getting people to the right place and giving them – whatever Bianca tells them – the feeling that they are being helped and seen. There are refugees who are so afraid that only here in the Netherlands they dare to admit that they are attracted to men or women or are transgender. By taking this kind of thing as normal, you reduce the stigma and gain people’s trust.”

Free to be who you are
Let’s close with  Frederique ‘s answer to her attackers when they asked her gender: “It doesn’t matter. I am who I am and you can be whoever you want to be!” That’s how it is!

Google translate was used to translate to English.